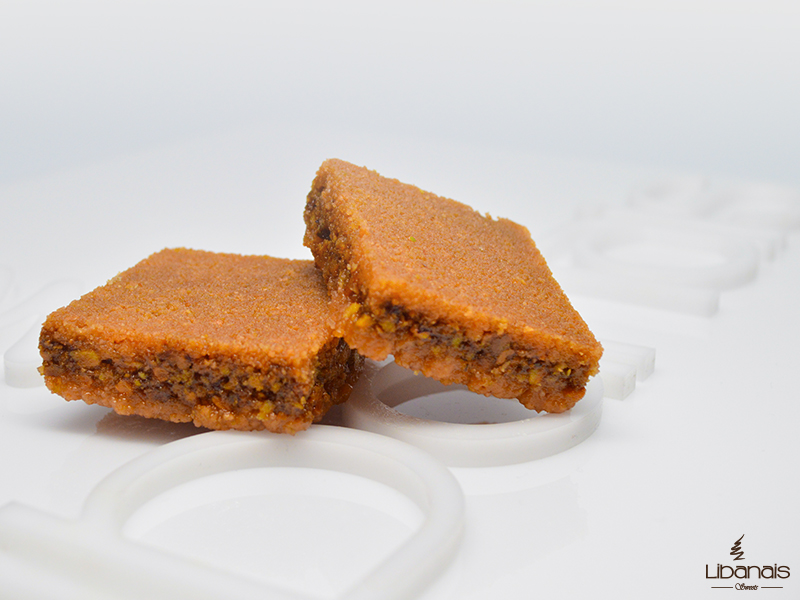 Libanais’ signature delicatessen: Semi-chopped pistachios sandwiched between layers of our special knafeh dough. Baked to perfection and topped with rich almonds, pistachios, and pine nuts. It is juicy and soft.

It is the richest, most luxurious, and most desired piece of all Assorted Baklava sweets. Filled with pistachios on the inside and garnished with almonds, from the top, it is the richest piece in nuts. It is juicy, soft, and very sweet.

Meaning and Pronunciation of “Basma”

Pronounced [bas-mah], it comes from the Lebanese word for “a smile”. Well, it is guaranteed to put a smile on your face from the first bite.

How is Basma Made?

The grounded Knafeh dough is prepared, then multiple layers of dough and nuts are stacked and baked.

Knafeh dough consists solely of flour and water. To prepare it, flour and water are mixed for about four hours to form a watery mixture. Then the mixture is poured into a special container that contains small holes in its base and placed on top of a hot surface. As the watery dough mix passes through the holes, it forms filaments of dough. The container is moved along the hot surface as the dough mixture drains through the container to form long strings of dough. The strings of dough are let to dry, and are then grounded. Voila, you got the grounded Knafeh dough.

The Basma made of layers of dough and nuts is initially baked for 20 minutes on medium temperature, then flipped over and baked for another 20 minutes. After baking, sugar syrup is added.

Basma is served as a dessert. It is usually served as part of Baklava assortments.
Popularity
Basma is mostly popular in Lebanon.

Basma is one of the assorted Baklava pastries that are made with knafeh dough.